Nielsen Examines The Digital Habits And Impact Of Black Consumers

More than half of African Americans were born and raised in the digital age, changing the face of brand engagement, content creation, and consumption in the U.S.

African American consumers are enjoying a remarkable period of influence, cultural expression and entrepreneurship that is manifesting digitally and trending mainstream, according to global researcher Nielsen. With the highest smartphone ownership and usage of any demographic group and an unyielding desire for self-expression and image control, African Americans are leveraging digital platforms and technology to move from consumers to creators–of platforms, products, content and financial ecosystems. 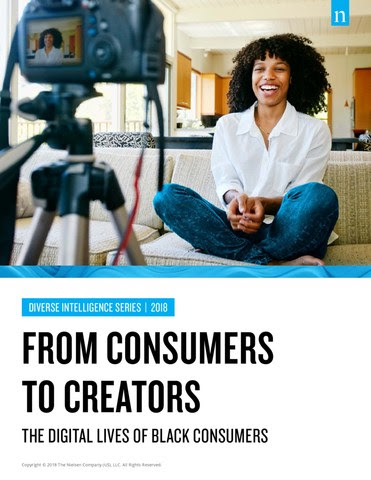 According to “From Consumers to Creators: The Digital Lives of Black Consumers,” the eighth annual report in Nielsen’s Diverse Intelligence Series on African American consumers, Black influence on the economy and pop culture has been intensified by participation in the digital universe and adoption of social media and technology platforms. From video streaming and podcasting to gaming and shopping for food online, African Americans are leaning into digital know-how and open-source innovation—with an unprecedented impact on brands, elections and what the country watches, buys and listens to. Black consumers are boldly galvanizing in the digi-sphere to critique, connect, collaborate and create.

“African Americans are leveraging innovations in technology and social platforms to level the playing field and get ahead in a marketplace unencumbered by corporate barriers to entry,” said Cheryl Grace, Senior Vice President of U.S. Strategic Community Alliances and Consumer Engagement, Nielsen. “African American influence has long resonated cross-culturally, and now it’s being delivered directly from creator to consumer. Give talented, creative people unobstructed access to the world stage and, inevitably, they will shine.”

African Americans, representing 14% of the U.S. population (47.4 million), are using unfettered access to technology as a means to broaden their reach and express themselves on their own terms. Streaming is a primary source of entertainment for African Americans. They stream videos more frequently on all devices than the total population, especially on phones. Black consumers’ music streaming habits played a key role in R&B/Hip-Hop unseating Rock as the No. 1 music genre in the U.S. in 2017.

African American shopping habits also are shifting in the digital age. According to the report, that is incredibly important to brands because African American buying power is at $1.3 trillion currently and based on gains in population, income and education, it’s estimated to rise to $1.54 trillion by 2022. More than half (54%) of all African Americans have lived their entire life in the digital age. These tech-savvy Gen X, Millennial and Gen-Z consumers represent a coveted market segment whose interconnectivity is central to their everyday lives—particularly the product purchase cycle. The report urges smart marketers to recognize this shift from consumer to creator and offers insights on building new inroads to this culturally conscious and digitally native consumer segment.

One digital creator highlighted in the report is actor, activist, and digital gaming co-creator Jesse Williams. He shared, “as a company, Visibility knows that our strengths are also the market’s weaknesses: Black ownership of Black creativity. Technology is an opportunity to make decisions that no longer divorce people from their power. We set out to empower our culture–to lead and learn without fear.”

“The breadth of Black America’s digital footprint has grown exponentially with the rise of smartphone technology and increased access to new mediums for content exchange,” said Kimberly Bryant, founder of Black Girls Code and a Nielsen External Advisory Council member. “The access to technology among Black consumers is a lightning rod for innovation that’s opening doors of opportunity to creativity, entrepreneurship and financial independence.”

For more details and insights, download From Consumers to Creators: The Digital Lives of Black Consumers at www.nielsen.com/africanamericans. Join the conversation on Facebook (Nielsen Community) and Twitter (@NielsenKnows) using #NielsenKnows #Consumers2Creators.